We are pleased to announce that thanks to a wonderful local grant writer, the cooperation of the Village of Kaslo who are the qualified applicant; a grant has been obtained to replace the Condenser, the last of the original (40+ years old) ice plant infrastructure. The replacement of the condenser will occur after the end of the upcoming season. Other aspects of the grant, alarm remediation and electrical upgrades will take place before the start of the season.

The Kaslo & District Arena Association is a village asset run by a Volunteer Board. These volunteers are dedicated to maintaining and improving the arena, in a fiscally responsible manner, by providing the best ice and facility at the most economic price possible, for the enjoyment of the community of Kaslo and surrounding area. The Complex facility houses a standard sized hockey rink, meeting facilities, viewing/exercise room, kitchen, two curling rinks, a lounge and concession. Various rooms, or all, are available for rental in the off season. To contact the Curling side of the complex please visit their website: kaslocurling.com

Coming to Kaslo for hockey? visitkaslo.com has all the information you need to make your stay easy and enjoyable!

The Arena viewing room is a great rental space for dances, large meetings, or kids play time.
Ask about our Birthday Party Packages 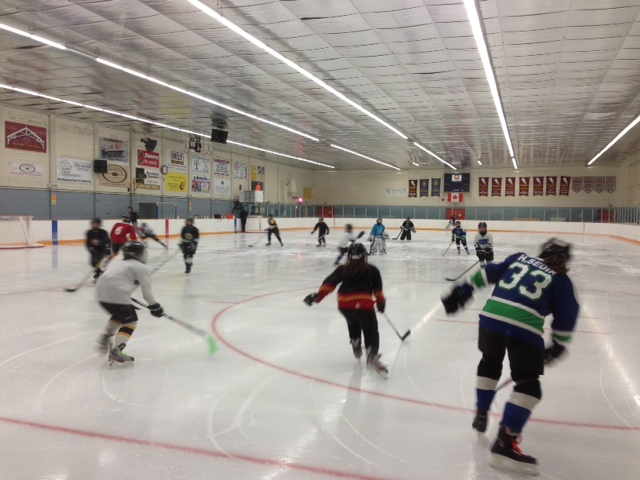 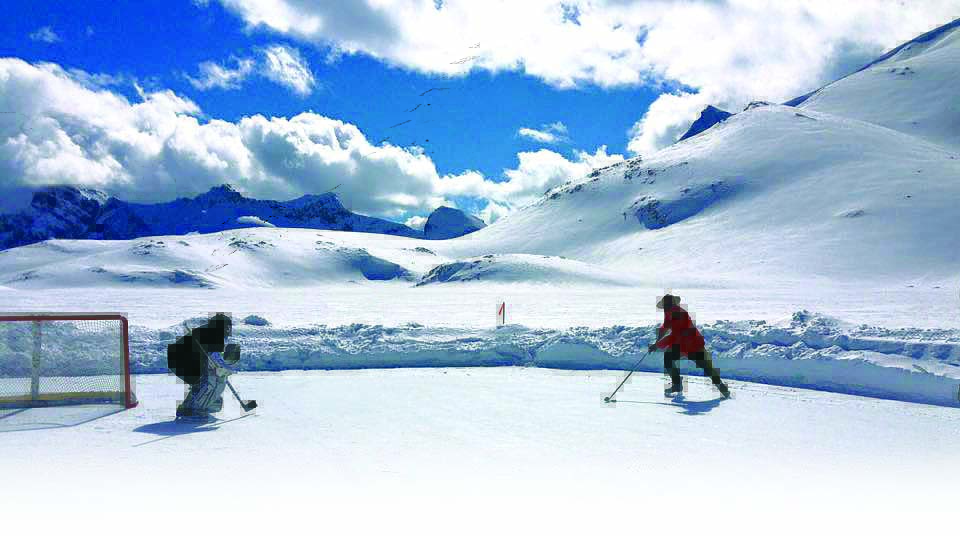 Mountie and the Goalie
®Rick Wiltse

It’s a scene played out thousands of times in thousands of places across Canada – the familiar sound of skates biting into crisp ice, the cold, clear, blue sky with fluffy white clouds, the almost perfect silence, save for the energetic grunts of exertion from the skaters as they circle the ice and take the occasional shot on goal.

This, they all knew would be different – their days of planning culminating in a day like no other – with memories to last a lifetime.

“They” are the players on a rec hockey team called the “AfterBurners “from the picturesque village of Kaslo, a small town in the West Kootenay’s of British Columbia, who lace up their skates every Saturday night during the hockey season for some competitive hard-nosed hockey. One of the Afterburner players, Erik Matthews, a helicopter pilot by day, had recently been to a glacial lake near Invermere, high up in the Purcell mountain range, and had been openly musing with his team mates about how amazing it would be to get to play shinny on this lake. Erik’s excitement was contagious and the serious planning of making it all happen began – it was an opportunity far too good to pass up.

The excitement was electric, and when it finally happened, twenty two hockey players – two 11 man teams one from the East and one from Kaslo in the West Kootenay, had the opportunity of their recreational hockey careers to play pond hockey at an altitude of approximately 9000 feet in the Purcell mountains. Eleven skaters at a time were shuttled up to the glacial fed Shamrock Lake, via helicopter to a pristine location for a hockey game that all Canadian hockey players dream of.

One of the Kaslo Afterburners was the RCMP Detachment Commander at Kaslo Cpl. Shaun Begg. Cpl. Begg had brought along his iconic Red Serge with hopes of obtaining a photo to capture this experience, for a personal keepsake, or maybe a photo for his office or to place on Christmas card. “To me it was a no-brainer “says Cpl. Begg “the best way to capture this most Canadian of moments was to get a few pictures of me in my red serge, another symbol of Canada.” During a lull in the action Cpl. BEGG donned the iconic red Serge and took to the ice. Pictures were taken and the Afterburners captain Rick Wiltse snapped the photo that was eventually sent to Cpl. BEGG’S Supervisor who in turn forwarded to the BC RCMP Twitter feed. In short order this photo went viral and was dubbed by CBC to be “The Most Canadian Photo Ever.”

The rest as they say is history. The “Most Canadian Photo, Ever “ was born.